1. It is a common endoparasite in the intestine of human beings.

2. Body worm-like and has pseudo-segmentation.

3. The females are larger and stouter than males and measure about 20-30 cm in length, whereas males reach to about 15-26 cm in length.

4. Mouth is having 3 distinct lips.

5. Pharynx has few caeca but no posterior.

6. The posterior end of female is straight and that of male is curved.

8. Body is marked with four longitudinal canals or lines which run along the whole body length.

10. The fertilized eggs pass out with faeces and hatch into embryos in warm and moist soil and infection occurs through contaminated hands and drinking water. 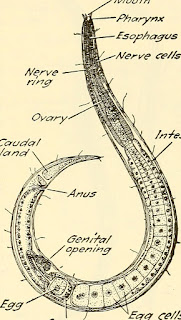 ASCARIS – THE ROUND WORM
Ascaris lumbricoides is known as roundworm that is commonly found as intestinal parasite in vertebrates like man, pig, cattle etc. It is cosmopolitan in distribution but abundant in tropical countries.

Ascaris is a cylindrical worm, white to light pinkish in colour, tapering at both ends. Female measures 30-40 cm and male 15-30 cm. Posterior end of male is curved.

Tail is straight in female and carries a transverse anus and a chemoreceptor called amphid between the anus and the tip of tail. In male the tail is curved and anus is replaced by cloaca from which two equal chitinous spicules or penial setae project out. In male two rows of preanal papillae and single and double postanal papillae are present.

Epidermis is the outermost syncytial layer covered on the outer surface by cuticle, which is a thick, transparent and noncellular layer secreted by the underlying epidermis.

Epidermis is also called hypodermis as it lies below the thick layer of cuticle.

Below the skin muscles form a single layer of spindle-shaped cells that line the body cavity. The muscle layer is divided into four longitudinal columns, two dorso-lateral and two ventro-lateral. Circular muscles are altogether absent.

Pseudocoelom is characteristic body cavity of round worms. It is filled with protein rich pseudocoelomic fluid and carries five giant mesenchyme cells, known as pseudocoelomocytes that occupy fixed positions in the anterior third of the body. Pseudocoelomic fluid is composed of about 93% water and substances such as protein, glucose, non-protein nitrogenous substances, sodium chloride and phosphate.

Alimentary canal is a straight tube extending from mouth to anus and comprises mouth, a short pharynx or oesophagus, a long tubular intestine and a short rectum. Mouth is triradiate leading to pharynx or oesophagus that opens posteriorly into a thin walled dorsoventrally flattened intestine or midgut, which extends to the entire length of body. The posterior part of intestine opens into rectum that terminates in anus or cloaca. Food consists of blood which is sucked by the pumping action of pharynx. Digestion is extracellular in intestine. Digested food is absorbed by the intestinal cells and distributed by the pseudocoelomic fluid. Some intestinal cells also engulf small particles by phagocytosis and digest them intracellularly. Food digested by the host intestine is also directly absorbed through the skin.

Ascaris respires anaerobically because of lack of oxygen in host intestine. In this process, glycogen undergoes glycolysis and finally yields carbon dioxide, fatty acids and energy. Aerobic respiration also seems occur if free oxygen is available in host intestine, as small amount of cytochrome is present in round worms.

There is a single giant H-shaped rennet cell forming excretory system. It consists of two lateral longitudinal excretory canals, connected below the pharynx by transverse canalicular network. A short terminal excretory duct extends from the left side of canalicular network to the excretory pore situated midventrally on the anterior side of body. Nitrogenous wastes, chiefly urea, are collected from different parts of body. Pressure of pseudocoelomic fluid helps in ultrafiltration.

The nervous system consists of circumpharyngeal ring that carries a dorsal ganglion, a subdorsal ganglion, lateral ganglia and ventral ganglion. From the circumpharyngeal ring six small nerves supply the sense organs of the anterior side. Posteriorly six longitudinal nerves arise from the ring and reach the posterior end. They are mid dorsal nerve, mid ventral nerve, one pair of dorsolateral nerves and one pair of ventrolateral nerves.

The dorsal and ventral nerves are connected by a number of transverse commissures. 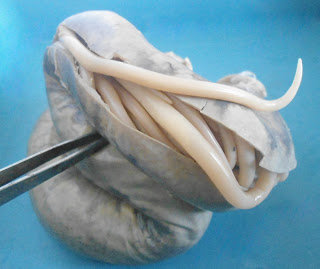