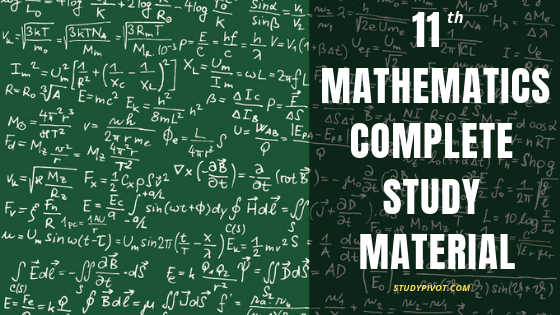 In this section you will get complete study material for 11th class to prepare for IIT JEE Main/ Advanced/ CBSE and other engineering entrance exams. In this study package the chapter contains complete theory with examples and then related objective and subjective exercises with previous years IIT JEE Main and Advanced questions with solutions related to 11th Class.
List of Topics in 11th Mathematics Package
1. Sets Theory and Relations
Sets and their representation; Union, intersection and complement of sets and their algebraic properties; Power set; Relation, Types of relations, equivalence relations.
2. Logarithm and Exponent Rules
3. Complex Numbers and its application
Complex numbers as ordered pairs of reals, Representation of complex numbers in the form a+ib and their representation in a plane, Argand diagram, algebra of complex numbers, modulus and argument (or amplitude) of a complex number, square root of a complex number, triangle inequality.
4. Quadratic Equations and Inequations
Quadratic equations in real and complex number system and their solutions. Relation between roots and co-efficient, nature of roots, formation of quadratic equations with given roots.
5. Sequence and Series (Progression)
Arithmetic and Geometric progressions, insertion of arithmetic, geometric means between two given numbers. Relation between A.M. and G.M. Sum upto n terms of special series: Sn, Sn2, Sn3. Arithmetico – Geometric progression.
6.Permutations and Combinations
Fundamental principle of counting, permutation as an arrangement and combination as selection, Meaning of P (n,r) and C (n,r), simple applications.
7.Binomial Theorem and Mathematical Induction
Binomial theorem for a positive integral index, general term and middle term, properties of Binomial coefficients and simple applications. Mathematical Induction, Principle of Mathematical Induction and its simple applications.
8. Probability
Probability of an event, addition and multiplication theorems of probability.
9.Trigonometry-1
Trigonometrical identities and equations. Trigonometrical functions.
10.Trigonometry-2
Trigonometrical identities and equations. Trigonometrical functions. Inverse trigonometrical functions and their properties. Heights and Distances.
11. Co-ordinate Geometry and Straight lines
Cartesian system of rectangular co-ordinates in a plane, distance formula, section formula, locus and its equation, translation of axes, slope of a line, parallel and perpendicular lines, intercepts of a line on the coordinate axes.
Various forms of equations of a line, intersection of lines, angles between two lines, conditions for concurrence of three lines, distance of a point from a line, equations of internal and external bisectors of angles between two lines, coordinates of centroid, orthocentre and circumcentre of a triangle, equation of family of lines passing through the point of intersection of two lines.
12. Pair of Straight lines
13. Circles
Standard form of equation of a circle, general form of the equation of a circle, its radius and center, equation of a circle when the end points of a diameter are given, points of intersection of a line and a circle with the center at the origin and condition for a line to be tangent to a circle, equation of the tangent.
14. Conic Sections (Parabola, Ellipse and Hyperbola)
Sections of cones, equations of conic sections (parabola, ellipse and hyperbola) in standard forms, condition for y = mx + c to be a tangent and point (s) of tangency.
15. Statistics and Measures of Dispersion
Calculation of mean, median, mode of grouped and ungrouped data. Calculation of standard deviation, variance and mean deviation for grouped and ungrouped data.